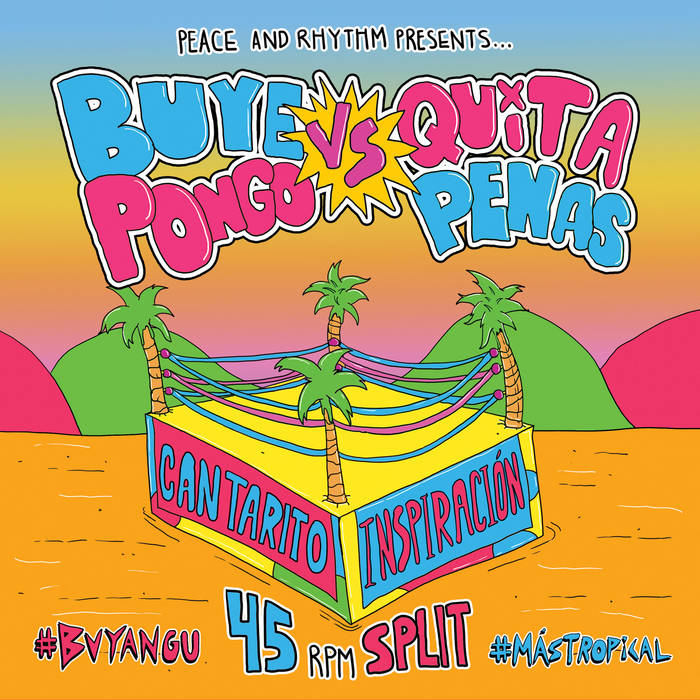 Todd M. Simon 2 of LA's musical gems back to back via a versus 45!!! You've never caught a jam in LA unless you've experienced one with these guys! Favorite track: Inspiración (45 Mix).

You might say Buyepongo and Quitapenas are sibling neighbor bands since they are of Mexican-American heritage, share some band members, have similar musical influences and are based in the Los Angeles area. Both transmit a similarly positive, socially committed outlook and life philosophy through their creative output. In addition they have toured together and are part of the same larger socio-musical community. That is not to say the bands sound exactly the same or have the same origin story. Rather, it means they have enough in common that over the years they have forged a strong bond of friendship that has proven mutually beneficial for both bands and has helped them grow and build in a unique, positive way. While each group maintains their own separate identity, they share a long-standing, committed fan base and both have previously released music on the same label as well. Most importantly Buyepongo and Quitapenas are part of an exciting generation of underground, independent, alternative Latin music inspired by tropical and folkloric roots from the Caribbean, Mexico, Central and South America as well as Africa, all of which is played with elements of jazz, psychedelia, electronica, and global funk.

With all of these connections it was only a matter of time before these brother bands would decide to collaborate on a release, and in 2020 they did just that, approaching Peace & Rhythm with a concept born of their recent joint tour (which was sadly cut short by the global pandemic). Now, as 2021 begins a new year full of hope, this release is set to start things off with two super hot tracks presented side by side and packaged with some dope artwork by honorary band member Deladeso. Buyepongo’s “Cantarito” is an infectious, funky tropical romp that is the perfect soundtrack to an instant fiesta full of family and friends, food and fun. The lyrics mention making traditional tortillas and drinking from a cantarito (clay cup) while the band plays and the sun shines. The flip, “Inspiración” by Quitapenas, is equally upbeat and literally “inspiring” (pun intended), with its positive energy and lyrical outlook about the creative process.

Both cuts are fueled by infectious beats, compelling vocals, intricate guitar interplay and soaring sax, carrying you away into a state of ecstasy that is akin to a heightened feeling of spiritual bliss and oneness. Now more than ever the musical messages of these two bands is a healing, unifying force that provides an essential service to the people in a time of dire need and isolation. The Buyepongo vs. Quitapenas split 45 is certainly inspiring: it will inspire you to get up and dance but also think and feel more deeply. Maybe you’ll make a joyful noise (Buyepongo can be loosely interpreted as “I make a noise”) and your pain will be taken away (which the term quitapenas refers to), at least for the duration of this double-sided tropical love-fest disguised as a Lucha Libre match.

Buyepongo is a LIVE and vibrant polyrhythmic sound that seamlessly fuse Afro beats which include (but are not limited to)merengue, punta,and cumbia. Creating what is now being referenced as "Buyangu". #buyangu

Bandcamp Daily  your guide to the world of Bandcamp

Featured sounds from Fly Lo and Ahmed Idris, plus Mother Nature hops on to drop off new project